The gMax 2 Pro uses the popular Marlin 2.x open-source firmware and it has been tailored for the machine. We offer pre-compiled .bin files for the printer so updating is quick and easy.


1. Use a Micro SD card to install the mainboard firmware.​
​ 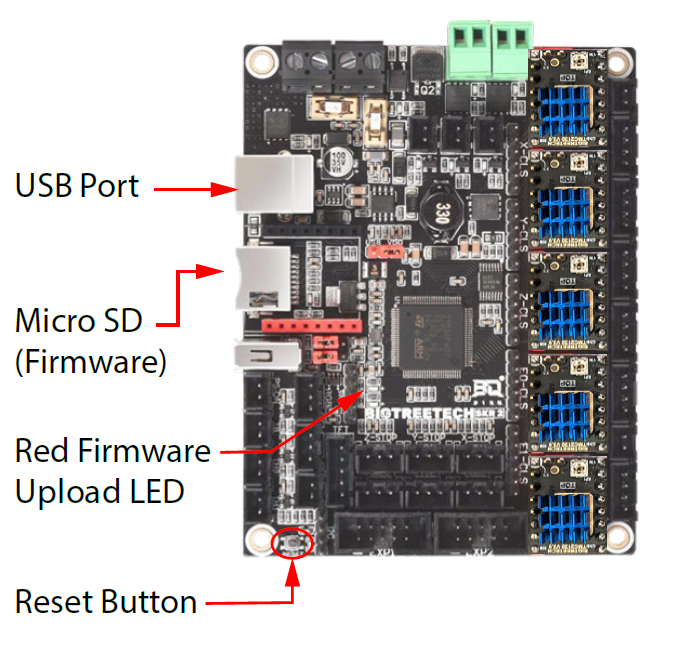 2. From your computer, download the correct .bin file for your machine and put it in the main folder of the SD card. The file must be renamed to “firmware.bin” or the printer won’t recognize it.​
3. Once you have transferred the file, put the card back inside the printer and turn it on. You should see a small red led blink twice slowly then several times quickly as the firmware uploads. If this didn’t happen then press the reset button to force the printer to try again.​
4. The update will happen quickly and the way to verify it installed is to go to “Menu > Settings >Info” to check the date of the build.​
5. After the upload the file on the SD card will be named “firmware.CUR”. If it isn’t then, the firmware didn’t upload. Reformat the card using a PC and try again.​
​
6. After the firmware update, the bed leveling matrix might be erased and a warning will appear that says “Failed to enable bed leveling”. This is normal and just press “OK” then run the bed leveling routine again.​
​
7. If you have installed new firmware after 11/7/22: if you see a prompt on the top banner that says "EEPROM can hold 5 Meshes" then the update was successful.​
​
Troubleshooting Firmware

o When you install firmware, there should be an LED on the motherboard that will flash twice, then several times. Also, when you put the micro SD card back in the computer the firmware.bin filename should be renamed to firmware.CUR. If these two things didn’t happen, try the following:

o Reformat the card with Fat32 and try again. If on a Windows PC uncheck the quick format option.

o If you are using a Mac, try formatting the card on a Windows PC and try again.